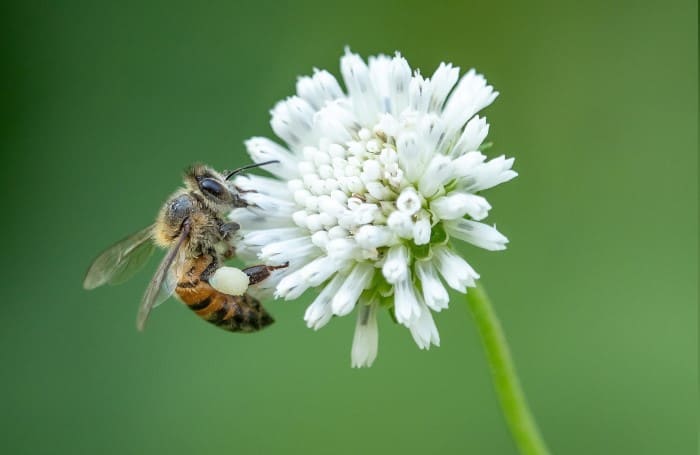 Clover honey is a form of honey that people produce from bees that feed mainly on nectar from clover plants. New Zealand, the United States, and Canada are among the world’s leading producers of clover honey but the level of honey quality differs. You can easily get this type of honey from the local stores because most people love its mild floral flavor and because of its low cost.

All honey, including clover honey, comes from honeybees. Bees have to feed on nectar and the pollens of various plants and convert them into honey through secretion. Mostly, the honey will take the flavor of the flowers the bee feeds on, which means that to provide clover-flavored honey they have to visit clover plants. But, because there is a wide variety of cover crops, most people have problems choosing the best clover for honey bees. We will help you choose the best clover plant for your honeybees and differentiate between pure clover honey and the rest.

If you are interested in learning more about how to cultivate your garden to be friendly to bees and other insects, checkout our online course recommendations.

About the clover plant

Clovers are creeping pea family plants that produce nectar in large amounts. People from different parts of the world use the plant to control soil erosion on hillsides and riverbanks because they have deeper roots and are strong enough to hold back the soil. The plant is good for animal fodder too and it will grow in most terrains. In fact, it is inexpensive to maintain and attracts honeybees naturally.

Beekeepers that make clover honey generally place the hives in areas with many clover plants. They also plant clovers around beehives so that the bees can have them as their food. Unless your bees are in an enclosed area, there is no guarantee that the bees will visit the plants alone. As a beekeeper, you have little control over where your bees can go during the day and the flowers they can visit. If you are living in an area with a higher concentration of clover, the bees will primarily feed on them but they will visit other types of flowers.

That will introduce some flavors from other flowers too. Each time your bees feed on flowers that have pronounced flavors such as eucalyptus, the secretions will affect the taste greatly. That should tell you that it is hard to get pure clover honey.

Listen, if you want my recommendation for a high quality clover based honey checkout YS Clover Honey Pure Premium, it gets great reviews online and is priced at a bargain!

The best type of clover for honeybees

The crimson clover is the most dependable clover honey crop, but unlike others, it blooms earlier than the others do. On the grazed pasture, the blooming starts early in April and ends in Mid-April. The blooming lasts for only three weeks and therefore colonies have to be built earlier to use the flow. That is possible with proper management.

Even though Dutch clover has great yields, it blooms in mid-March, which means that it can be hard to have colonies strong enough to use the flow. The heat kills it later, but in some places, it blooms throughout summer. Sweet clover produces good flows, particularly on the heavy soils, and in sufficient quantities in the produce of clover. White sweet clover blooms throughout the year. Some yellow clovers are annuals too. Here are the descriptions of some of the clovers to try in your area.

There are companies that specialize in clover based honeys. Gunter’s pure clover honey stood out as a brand I could trust.

Alsike clover is among the best honey plants in the United States. If you are among the beekeepers that live within the reach of larger fields of this type of clover, consider yourself fortunate because under favorable conditions the crop produces the best honey. Approximately, an acre of Alsike Clover produces around 500 pounds of honey. The clover does best on clay soils and wetlands. When grown from seeds, it does not take long to bloom but it will not produce many tons of hay like red clover. The clover produces honey white in color and with a mild flavor. People consider it the best. A single colony of bees can gather up 72 pounds within four days or 18 pounds each day. That takes account of the honey bees consumes.

Crimson clover is another type of clover that people grow in the Southern States. The clover is not hardy in the Northern part and does not bloom earlier like most other clovers. Blossoms are snowy than the red clover or alsike. The clover is an annual bloom and you must plant it each year to enjoy the best yield. The reported honey yields are good and have a similar quality to that of most other clovers. However, most farms do not grow it on a large scale and it is therefore not a known source of quality honey. It stands as third when it comes to honey yields. The resulting honey has a light yellow color.

The white sweet clover and yellow sweet clover are the more valuable and widely distributed crops. The yellow species bloom around two weeks earlier than the white does and therefore you can enjoy a longer honey flow if you plant the two types. Sweet clover produces more honey during the hot and dry summer months, particularly in the Rocky Mountains and Mississippi.

In the East, the honey resulting from the plant has been disappointing and most eastern men believe that the crop is an overrated honey producer. However, people who have witnessed the big flows along the Missouri River and the west praise it.

In the West, people grow the sweet clover extensively and the yield is around 200 pounds per colony. On limestone soils of Mississippi and Alabama, the crop yields freely and people report large yields. In the west, irrigated farms featuring this crop are common too. In Kentucky, Kansas and Nebraska people grow it in large areas. The high acreage of the plant doubles the honey production possibility.

White and yellow sweet clovers grow to a height between four and eight feet before they start blooming. They do not produce flowers until the second summer in Prairie stats, sweet clovers are in the list of invasive species and no row crop farmer likes them. Planting the clover in a large area and failing to bush hog it down or hay it off during the fall; you will be inviting a wildfire if freeze happens to kill it. The seeds can remain dormant for 30 years and the crop faces little competition for the native grasses and plants.

Differentiating clover honey from the other types of honey

To differentiate pure clover honey from the rest, you should rely on the color, scent and flavor. The honey coming from bees that feed purely on clover has an almost white color. It has a subtle flavor and grassy floral scent. Actually, most of the honey you get in stores labeled as clover honey is a blend of the light colored kinds of honey. So, unless the label claims that the honey is “pure clover”, you should know that clover is not the primary source of nectar but it only contributes to the flavor. Moreover, two different bottles of clover honey, including those from the same farm or manufacturer, are likely to have a different taste.

The quality of clover honey

The quality of clover honey highly depends on various factors. The first factor is the time of year the farm or manufacturer collects it. In summer and late spring, the honey will carry a stronger and richer flavor. Clover flowers are usually in full bloom during that time and bees gather more fragrant and robust nectar.

The process a beekeeper adopts when it comes to extracting, filtering and storing the honey can also affect the marketability. Mostly, producers strain or filter most of the honey to remove the debris, air bubbles and the wax bits. That is enough to make it appear clear and remain in a liquid state for a long time because there are no particles to allow crystallization. However, ultra filtration extracts the pollen and any other solid from the honey. Because there is an addition of water, the resulting solution is not one of the things that the US Department of Agriculture considers as honey but some farms might sell it as clover honey. Most small honey farms promote their honey as unfiltered.

Regardless of the type, all honey is an antioxidant. That means it can help our body eliminate the harmful free radicals, which are known to cause health concerns such as cancer. Honey is an antiseptic too and most people use it as a good treatment for scrapes, cuts and sore throats.

Natural pure honey should not have any added sugars, flavorings or corn syrup. That makes it darker in flavor and color. The producing farm should label it as raw if it is unfiltered, unpasteurized and unheated. There are many commercial honey producers and their honey can be natural. However, it is not natural if it has any changes or flavorings. In the market, you will find fruit-flavored honey that you can drizzle onto waffles, spicy honey to drizzle on fried chicken and dried honey for adding to mixed drinks. Honey with a higher PH such as 6 is purer than honey with low PH level such as 3. That affects the sweetness and the flavor in addition to how the body processes it after consumption.

Clover honey generally comes in squeeze bottles or jars, but you will find other forms of presentation and packaging in the market. Some farms choose to whip it and package it with the honeycomb. People use creamed honey as a spread – more like cream cheese or margarine. Some products contain clover-derived honey. Farms may also supply yoghurts with blended in honey. It is a great additive to baked goods like bread because it will keep them moist. Most cosmetics, especially skin creams and lotions incorporate clover additives. That is because of the benefits it offers.