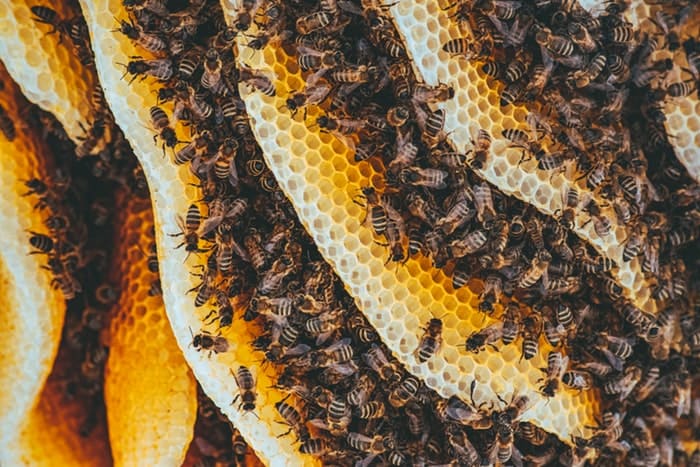 So, what does a bee sound like? The ‘buzzing’ has varying pitch and the sound that bees make comes from the movement of their thorax muscles agitating their wings. They move them quickly, causing vibrations. This is what you hear.

This movement allows them to move their wings in order to fly, communicate, or in some species of bees, pollinate some types of flowers (buzz pollination). When the human ear perceives these vibrations, it sends the corresponding signals to the brain, which interprets them as a buzzing.

The buzzing of bees changes a lot, depending on what they want to communicate to each other. They buzz louder when they get excited or stressed. The buzzing gets more aggressive when their beehive is under attack. They buzz in a particular way when they are about to swarm. Beekeepers can understand what happens in a beehive just by the way the bees are buzzing. they can tell when the bees are happy, angry, agitated, etc.

The Piping Noise of the Queen

This piping noise that the queen makes has a notoriously higher pitch than the buzz of the rest of the bees in the colony. It is like an extremely fast vibrating buzz that, for a moment, almost resembles the cry of a baby. A lot of times it is a series of short lasting sounds. The queen produces this type of piping noise in several specific occasions: when she is going to get out of her cell, when she just got out and is looking for the other queens to kill them, when she is released into a colony, etc.

The flowers of some plants, like tomatoes and blueberries, lose their pollen only through sonication (the use of sound waves to agitate them). Buzz pollination takes place when the bees use their wing muscles to vibrate their bodies (without moving or spreading their wings) to shake the flowers that they are standing on and obtain their nectar. Very few bees, like bumblebees and solitary bees, posses this ability. The vibrations of another object, like a tuning fork, can also release the flower’s pollen, but it is not as efficient as bees.

Through this last type of buzzing, the pollen is released and attaches to the bumblebee’s body. As it visits other flowers, it pollinates them by vibrating again.

Can You Distinguish the Buzz of Different Species of Bees, Wasps, and Hornets?

They all buzz differently, but there are too many species around the world to be able to memorize them all. The differences in their buzz are based on what has already been stated. For example, a bumblebee is larger than a honeybee, which means that its buzz should be in a lower pitch. If you compare the two at the same time, you can see that it is true. However, if you listen to the buzz of either one of them (without making any type of comparison), you might not be able to identify the type of bee. It would be like listening to someone play a musical note in any instrument and identify it just by its pitch.

People with perfect pitch might have an easier time recognizing the buzzes of these insects (and even contribute important information regarding the pitch of the buzz that each one makes). However there are thousands of different species of bees, wasps, and hornets. Some of them are so close alike that even the experts have a hard time distinguishing if it is a bee, wasp, or hornet (visually). Also, all of these insects produce many different types of buzzing sounds, depending on a lot of factors.

Is it possible to listen to a buzz from any one of these insects and distinguish the species of bee, wasp, or hornet that makes it? An expert, like a beekeeper, can memorise the sounds of the few species that live in the surrounding areas, but the thousands of species of the world might be too many to remember.

Can You Tell the Difference Between a Beehive and a Wasp/Hornet Nest Just by Sound?

The sound from each nest would be slightly different, and they may be recognized by an expert if there are only a few local species. They are all very similar species of insects and they all make very similar buzzing sounds. Perhaps the different types of nests that they build can affect the buzzing sound and this can help in distinguishing them.

The major differences in the sounds of beehives consist in the amount of bees in the colony, how much of it is hidden, and how high or low is its location. If you study only the most popular species of bees, it may seem easy to distinguish them. However, there are thousands of species of bees, and some of them could be confused with wasps or hornets.

Bumblebees have underground nests. You can see a hole in the garden ground and bees entering and leaving the hole. The sound you can hear is the typical buzz that bees make, but a with a little less volume. That is because the hole on the ground is the only place that allows the sound to travel outside of the beehive.

Honeybees live in large colonies with thousands of bees. They build their nests in higher cavities and sometimes inside walls. They tend to also make less noise than the nests that are exposed (in trees, bushes, covers, etc.) but their huge beehives make a more intense sound, revealing greater activity. The sound also comes from higher places instead of the ground.

There are different kinds of nests that wasps make, depending on the species. Each one should produce a slightly unique type of sound. The sound that the nest makes can change as its size increases. When the nest of a wasp or hornet is small, there is very little sound coming from it. As it grows bigger, the buzzing sound also increases. When the nest gets large, the larvae make scratching and crackling noises as they move around their cells. In hot days the wasps or hornets take water to the nest to cool it down and stang there moving their wings to cool it.

Social wasps build their nests in attics, inside walls, and under decks. Paper wasps have an umbrella-shaped nests with one comb without a protecting cover. They build their nests underneath outer roofs of houses and buildings to protect them from rain and wind. They live for one season and if their nest didn’t grow big, they will be rather silent. Nests are only occupied only once.

Yellow jackets are the most aggressive wasps that live in colonies of a few thousand members. they build their nests in secure places in trees, shrubs, roof gutters, underground abandoned rat burrows, and covers. Sin they are aggressive, their nests can get very noisy at times. Because the nests are hidden, their noise is diminished.

Solitary wasps do not form colonies, so their nests are very silent. An example is the mud-dauber wasp. Despite the fact that wasps build their nests with the paper like material, this one builds it with dirt, sculpting and pasting it on an exterior wall. This wasp constantly returns to it, bringing paralyzed, living spiders and insects to feed its larvae.

Because of the huge size of hornets and their aggressive temperament, the pitch of their buzz should be much lower than that of bees and more aggressive, too. Their strong buzz sounds like a serious warning not to bother them.

Vespa affinis builds its nest hanging from bushes, trees, and houses. The nest has the shape of a pear or an oval and can have many entrances. Despite the fact that it is mostly covered with a protective layer on the outside, it is a noisy nest that sounds as if it has a lot of activity going on inside.

Vespa tropica builds its nest in low places in cavities and and holes in trees. The nest has a protective covering and the shape of an ellipsoid, with the entrance on the bottom. The nest does not make too much noise, but it is still the strong noise of hornets.

This is a very interesting video showing discovery, removal and relocation!

When there is a nest of these insects inside the wall, you can hear a buzzing and tapping sound behind it. During night it is clearer because they are all in their nest. With a stethoscope you can detect where the nest is and how big it is. If you knock on the wall you can hear the buzz getting loader for a moment. During winter, the hum is so low that it resembles the purr of a cat.

Bees produce a great variety of sounds and it is not easy to become familiarized with all of them. The thousands of different species produce slightly different sounds, and the great number and similarity of species make the task of identifying them by their sounds very complicated.