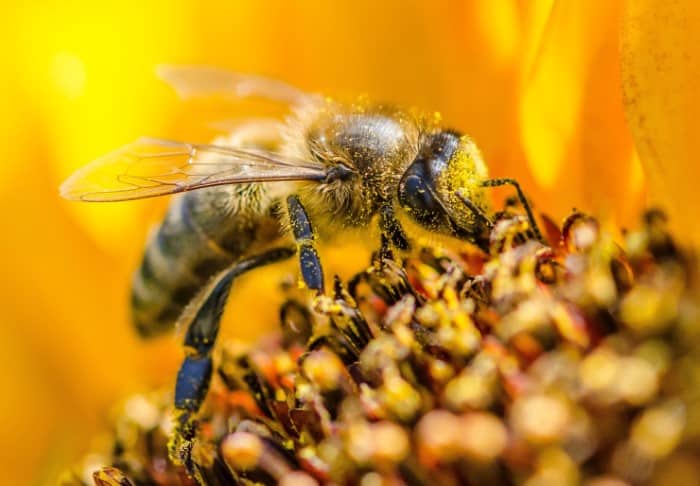 Just like other animals, honey bees also require particular elements to reproduce and to survive. Honey bee nutrition is important because it can affect not only their production of honey and the growth of their population, but also their contribution to natural food production. Unfortunately, there are times when bees don’t gather enough nectar that can sustain their proper nutrition. As a result, honey bees produce acidic honey, and worse, they die.

What Can Bees Eat? Aside from nectar, bees eat sweets like chocolate, sugar, jam, and syrups like golden syrup, corn syrup, and ambrosia bee feed syrup among others. Bees also eat fruits like oranges, apples, pears etc., and renewable food sources like honeydew.

In this article, I am about to discuss some of the alternatives for nectar that bees can eat. Most of these alternatives are used by commercial beekeeping farms to help their colonies survive nectar dearth, winter, summer, and other situations where the source of nectar is not enough or available. Check out which can benefit bees the most.

Honey bees make and store honey so they can have enough food for winter as well as during the times of the year when there are not enough flowers producing nectar. When bees don’t find nectar, they rely on the honey in their hive for the meantime. But if the honey inside their hives also runs out, the best alternative is to buy and feed them honey that is safe for them to consume.

Most beekeepers save some of the honey, which they harvested from the hive for this particular purpose. Doing this can help them to avoid feeding their bees with contaminated and processed honeys.

When feeding honey to bees, never place it in the open outside the beehive. In some countries, it is illegal to do so. This law is covered under the Livestock Disease Control Act 1994, which aims to prevent, monitor, and control livestock diseases.

To prevent honey bees from starving, several commercial bee companies feed medium to strong bee colonies with sugar. In some cases, dry sugar is placed in trays or hive mats under the lid of the hive. Bees need water to liquefy the dry sugar crystals, which they may obtain outside their beehive or through condensation that takes place inside the hive.

Some beekeepers, on the other hand, prefer adding water to sugar to prevent it from becoming solid. As a result, the sugar becomes a partial syrup. Dry sugar is best to use during spring and autumn when the environment is very humid. In dry and hot seasons, sugar water is preferable than dry sugar because it won’t require the bees to find a source of water to liquefy the crystals.

In seasons where flowers bloom but hold less nectar, some beekeepers feed their bees with jelly or jam. These two are both made from fruits and sugar, which means bees would want to eat them too. Bees are known to have sugar-sensing taste neurons that prolongs the pleasure of sweetness.

To feed your bees with jam, you can place it inside a jar with small holes on top and position it upside down on an artificial hive. Through the tiny holes, the honey bees can drink under. Examples of jam are grape jam, mango jam, pear jam, and so much more.

While it seems like a good idea to feed chocolate to bees, this sweet, dark food might harm them. Majority of food products today including chocolate undergo thermal treatments before consumption. These processes release HMF, which is an organic compound also known as 5-hydroxymethylfurfural.

Unlike humans, bees are less tolerant to HMF so feeding them chocolate is a bad idea. Rather than giving them chocolate in times of drought, you can give them other nectar alternatives instead such as dry sugar, jam, jellies, and the right kind of honey among others.

Golden syrup is a clear, golden-amber syrup made of cane sugar. It is a sweet liquid that is basically a form of sugar or sucrose. Some people mistake it for corn syrup but it is completely different. Given that golden syrup is mostly produced commercially, you can have the idea that it contains a high level of HMF which bees can’t tolerate.

Some beekeepers feed their bees with golden syrup during winter. While some didn’t observe any change on the health of their bees, long-term usage of this nectar alternative might cause dysentery.

High fructose syrups like corn syrup is bad for honey bees. This kind of syrup contains a particular level of HMF or hydroxymethylfurfural that may increase further, especially because of the heat. When honey bees consume a high level of HMF, it may lead to their death.

Several bee farms, on the other hand, still feed their colonies with this sweet liquid as an alternative to nectar during drought, winter, or in places where there is a low number of flowers rich in nectar. Mostly, the beekeepers of these companies don’t dilute the corn syrup whatever season it is.

In the year 1970s, a group of beekeepers and scientists developed a ready-to-use fondant and syrup products. These products are based on the sugar spectrum similar to honey with the purest beet sugar. This liquid-prepared food is closely similar to bee nutrition. It contains sucrose, glucose, and fructose, and the best thing about it is, it doesn’t include any contaminants.

It has sought popularity in Europe with the name Ambrosia and it has become a widespread bee food alternative later on. This kind of syrup contains a low level of HMF and its acidity is tailored to be considered as a safe food for bees.

In commercial application, agave nectar, just like other high fructose syrup, is often given to bees. But take note that these sweeteners are not safe to feed to bees.

Fruits are also loved by bees, especially during a nectar dearth. Bees are known to feed on fruits such as oranges, peaches, apples, pears, grapes, and others. Bees like to consume very ripe fruit since overripe fruits tend to be the sweetest. Aside from that, overripe fruits emit a particular sweet fragrance that bees can easily find.

Honey bees who pollinate orange trees produce orange blossom honey. But aside from getting nectar from orange blossoms, bees also love to feed on orange fruits. If you own a small or big orange orchard, but it is not yet the time of the year where orange flowers bloom, feeding your bees some oranges can help them survive the shortage of nectar.

The sweet fragrance of orange fruits not only attracts bees but these little creatures are also drawn to its color. Honey bees primarily rely on their vision to locate flowers and other food sources. The colors they see ranges from orange to violet, but they don’t see red.

Honey bees are also obsessed with overripe apples. As the skin of the fruit becomes softer, it becomes easier for bees to dig in. Honey bees placed  in an apple orchard eat apple fruits when they don’t find other nectar sources in the area. It is a good variation to their diet and it allows them to survive during the seasons when the source of nectar is incredibly low.

Although pear flowers produce a large amount of pollen, they contain little nectar. It is the reason why bees are not easily attracted to them. Pear fruits, on the other hand, are loved by bees, especially the ones that are very ripe.

A pear is a sweet, juicy fruit that comes with a hint of citrus flavor. During the season where pear trees bear fruit, you can observe bees roaming around your pear tree, especially when the fruits are ripe. Some individuals saw bees feeding on a fallen pear fruit. Bees tend to choose to feast on the very ripe ones so they can easily puncture its skin.

If you are planning to feed your bees with peach fruit, make sure to give them the white-fleshed variety. It has lower acid and tastes sweeter whether it is soft or firm. Peaches are among the favorite fruits of bees because of its amazing fragrance and sweet taste.

Beekeepers tend to place artificial beehives near grape trees to allow bees to pollinate them. As a result, their grape trees bear much fruit compared when bees are not around.

But it turns out that bees are also interested in the sweetness of grapes. Bees love to consume the sweet-tasting juice inside the fruit. On the other hand, bees may find grapes hard to eat, especially when the fruit is still firm. Grapes have a naturally thick skin, which is why bees choose to eat overripe grapes.

Renewable Sources Of Food For Bees

When bees can’t find flowers to gather nectar, they look for other sources like honeydew. Honeydew is not the fruit you have in mind, it is a sugary, thick liquid produced by insects that feed on plant’s sap , such as aphids. These insects sip the nutrients of a host plant, which it will excrete as a renewable source of carbohydrates among other compounds in the form of honeydew.

Honeydew is quite similar to nectar sugar. For bees, it is one of the most natural alternatives for nectar that can help them to get through in situations where there are not many flowers. Honeydew, on the other hand, is not as nutritious as nectar for bees. It is the reason why bees only feed on these liquids when they are running out of nectar source.

The amazing thing about honeydew is that bees can find them even without having colorful petals and unique fragrance. A study shows that some bees visit shrubs that are not bearing flowers during spring to collect secretions of honeydew left in the plant leaves by plant-feeding insects.

While bees can’t completely rely on plant- feeding insects for honeydew, it can help them to survive until flowering plants start to bloom again. Bees require pollen from flowers to reproduce but feeding them with honeydew for years won’t harm them. Unlike other nectar alternatives, honeydew is widely accepted by beekeepers. In California, 40 species of native, wild, mostly solitary bees are documented consuming honeydew.

Bees that are feeding on honeydew produces honeydew honey, which is a unique variety of honey that is dark in color and strong in taste. In Asia and Europe, honeydew honey is well known for its good medicinal value.

As a conclusion, these alternative food for bees are only some of the many options that you can give to your bees when they can’t find enough source of nectar in the area where they reside. Sweets and syrups might be the easiest and the most accessible food alternative for bees, but most of these contain high fructose levels as well as HMF that can affect the health of bees. Fruits are also a great option during winter and nectar dearth. Unlike sweets and syrups, it is safer for bees to feast on, but make sure to give them overripe fruits that are easy for them to eat. If you prefer to provide a renewable source of food for your bees, expose them to a place where plant-feeding insects reside. The honeydew produced by these insects is natural and pure, making them safe to consume by bees. To avoid nectar dearth and to bring new varieties of food sources for bees, plant more bee-friendly plants and trees around your area.