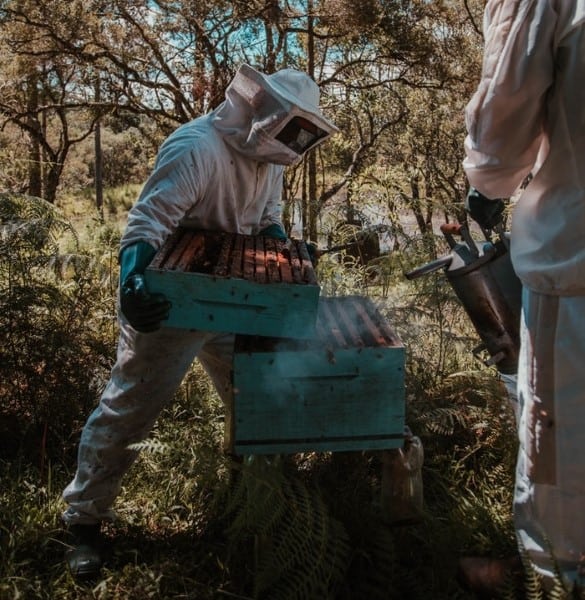 Bees, they are responsible for billions of dollars worth of food we consume. We, humans, owe these creatures a lot both agriculturally and environmentally.

Studies have shown that they are responsible for the pollination of the healthy and tasty food we consume almost every day. It is no wonder why the world has tapped into the pollination power of bees to augment our agricultural needs. One of the most used systems that beekeepers use for beekeeping is the Langstroth Hive system.

People who picture the beekeeping industry mostly picture this hive system without them knowing that it has a name. Most images you see online when you search beekeeping will show you beehives in a Langstroth hive system. It is the most common and widely used beehive in the industry and for a very good reason. It has become the standard in the beekeeping industry because of its ease in use and because of various other reasons too.

Let us get to know this system more in this article. Here you will learn what a Langstroth hive is, who the inventor is, the advantage and disadvantages of this hive system, the major parts, and other available beehive types.

What is a Langstroth Hive?

A Langstroth hive is a bee housing box where bees produce honey in frames that are easily moved and inspected. It is composed of three major sections that have very distinct purposes for bees.

Boxes – these are the located in the middle part and it houses the bees. This is where the bees care for their young, store honey, pollen and propolis. This middle part can be expanded by adding more box on top of the other to give bees more space to grow the colony.

Lower Section – is composed of bottom boards and foundations where the entrance to the hive is located. Most bottom boards have some form of landing strip that allows the bees to land first before entering the hive.

History of the Langstroth Hive

The Langstroth hive is named after the renowned American apiarist named Rev. Lorenzo Lorraine Langstroth. He is credited for his discovery of the “bee space”. It is when bees have less than 9mm (⅜ inch) but more than 6mm (¼ inch) of space to move inside the hive, bees would not create a comb nor close the gap with propolis.

But before the discovery of this bee space, hives were mostly kept in skeps or gums, but they are now disapproved due to the inability to check the hives for possible mites infestation. Later on, in 1789, François Huber introduced the leafe or book hive. This type of design allows the beekeepers to inspect the hive because of the frames can be leafed through just like a flipping a book page.

Additionally, other apiarists, such as Dr. Jan Dzierzon and August von Berlepsch also constructed side opened hives. During their time, multiple hives are kept in one box due to the lack of beekeeping areas available. Both apiarists followed the bee space requirements in making their hives. However, it was the discovery of Rev. Langstroth that really gave the beekeeping industry the edge it needed to grow.

It is on October 5, 1851, when Rev. Langstroth received his patent for the beehive he created. One of his friends, who is a cabinet maker back in his hometown in Philadelphia named Henry Bourquin, built Rev. Langstroth his first hives. It is also in this same year that Langstroth started selling his hive wherever he could.

“…the chief peculiarity in my hive was the facility with which they could be removed without enraging the bees… I could dispense with natural swarming, and yet multiply colonies with greater rapidity and certainty than by the common methods… feeble colonies could be strengthened, and those which had lost their queen furnished with the means of obtaining another… If I suspect that anything was wrong with a hive, I could quickly ascertain its true condition and apply the proper remedies.”

Beekeepers preferred the top opened hive design of Langstroth over the others. It allowed them to check each individual frames easily. It made the hive more accessible and expandable too. The design gave the beekeepers more chance to house larger colonies, therefore, making the honey production a lot more efficient than before.

The original design of the hives underwent major improvements before it became the efficient one that we use today. The first hives were made with a non-removable brood box and a single honey box with portico entrances and integrated floors. The honey box is a separate removable box that is placed inside an outer box which is closed with a hinged roof.

The design of this hive followed the same bee spacing requirements that allowed beekeepers to remove individual frames without too much disturbance to the bees. As the years went by, more improvements were made and soon the Langstroth hive added expandability to their list of advantages.

Reverend Langstroth did not stop studying the bees and later on made other discoveries and contribution, which made the beekeeping industry flourish. He also published a book entitled “A Practical Treatise on the Hive and Honey-Bee”. This book was then re-issued in 2004 under the title “Langstroth’s Hive and The Honey-Bee: The Classic Beekeepers Manual.”

In every situation, you will always see that there are pros and cons. The same can be applied to the Langstroth Hive. It has its own share of advantages and here they are:

After enumerating the advantages we will move on to the disadvantages of this type of hive:

Parts of a Langstroth Hive

The construction of the Langstroth hive made it possible for beekeepers to remove and separate each frame from all other parts of the hive. Less disturbance in bees is achieved through this system because there is no need to cut away the combs during an inspection.

The outer cover is the either made up of polystyrene or wood and it is used to cap the top of the structure. It can be a telescoping cover, which means it hangs down on the sides preventing water from reaching the inner part of the hive. The other kind is the migratory cover which is a solid cover that covers the top but does not have its edge hanging on the sides.

The main purpose of the outer cover is to protect the hive from the elements like rain, sun, and snow.

Traditionally, those who use feeders would place the inner cover with a communication hole on top of the box then put the feeder on top near the hole. They will then use an additional box to cover the feeder from the elements.

There are different depths for these boxes and these different sizes make the Langstroth hive easily expandable depending on the reason why you want to expand it.

The deep and medium depth boxes are used to house brood or are the brood chambers. The medium and shallow boxes are used to store honey or to house supplementary food source. The frames inside the medium and shallow boxes have top bars that hang on rails that run along the upper side of the box. This makes it easier for beekeepers to inspect each frame and determine when the frames are harvested.

Usually, beekeepers use a mixture of shallow, medium, and deep boxes for their apiary. It depends solely on the owner’s discretion what type of box he needs or wants to add onto his existing one.

You have the option to choose between 8 frames or 10 frames for your beehive. The 10 frames produce a lot more honey but they would be heavier to lift during inspections. 10-frame hives could weigh up to 80 lbs or more when loaded with honey. This is a lot of heavy lifting and would not be recommended for people who have some mobility issues.

On the other hand, the 8-frame hives are easier on the back, weighing up to 60 lbs when loaded with honey and 44 pounds when empty. This is the reason why most backyard enthusiasts prefer an 8-frame setting.

Your frames may also come equipped with foundations but this is an option. A foundation is either made from excess beeswax or from silicone plastic. It resembles the combs that bees make on the frame. The increase in awareness regarding the bee population status has led many to prefer a more natural way of keeping bees and this translates to an increase in enthusiasts who prefer foundationless frames.

Almost all bottom boards are made from exterior grade plywood. This type of plywood resist water damage and helps keep water and other insects out. These boards are sat on rails which then is either put directly on the ground or on a raised surface to keep moisture and other insects away.

Most beekeepers would also insert a white plastic sheet over the bottom covered in a sticky substance to catch and trap varroa mites. It is a great way to easily identify the colonies that might be infested with this mites, therefore giving the owner a chance to isolate the cause before it spreads to other hives.

There are optional parts for the Langstroth hive that you can buy. These are:

Are there other types of hive?

Two other types of a hive that are popular among the beekeepers.

Also referred to as TBH, it is a single long box that has wooden bars sitting on top of the hive. This is where the bees will build their combs that will eventually fill with honey. Each bar inside this structure is equipped with a starter strip hanging vertically where the bees can start building their honeycombs. A roof is also present in this design and involves no heavy lifting of any sort.

Most backyard beekeepers love this design for its simplicity and ease in use. There is no need for a foundation and is perfect for beekeepers who want to give their bees a more natural way of creating their hive.

It looks similar to a Langstroth hive but is much smaller in size. The founder of this system, Abbe Emile Warre, wants a more natural setting for the bees to develop their colony. You can say that this is a cross between a top-bar hive and a Langstroth hive. It employs the ease of expanding the hive just like a Langstroth and also is foundationless because the bees are left to create their own honeycombs.

Other types include the following:

In conclusion, the Langstroth hive is what most beekeepers in the beekeeping industry use because of its high yield in honey and portability. It is also the reason why it has been deemed as the standard in the beekeeping industry. The discovery of this hive structure has not changed since it’s conception. There are variations but the overall design still remains and will remain as long as it continues to perform its job effectively.

It has its own share of advantages and disadvantages for you to consider if you want to start an apiary soon. And lastly, there are other hive structures that you can choose from other than the Langstroth hive but all I can say is, experts would not make this the standard for man-made beehive without doing proper research.

How many bees can a Langstroth Hive house?

A beehive can house anywhere from 10,000 to 60,000 bees. But there are cases when a colony can easily reach 80,000 in numbers if given the right environment to live in. The bigger the hive, the more effective they are in producing honey.

How many bees are in a frame?

An estimated 300 up to 3,000 or more bees are present on brood frames depending on the number of sealed brood cells present on the frame.

How many types of bees are in a hive?

A honey bee colony has only one queen, male drones that reach hundreds in number and around 20,000 to 60,000 female workers in one hive.

Please see our other article on this: https://schoolofbees.com/how-many-bees-live-in-a-hive/