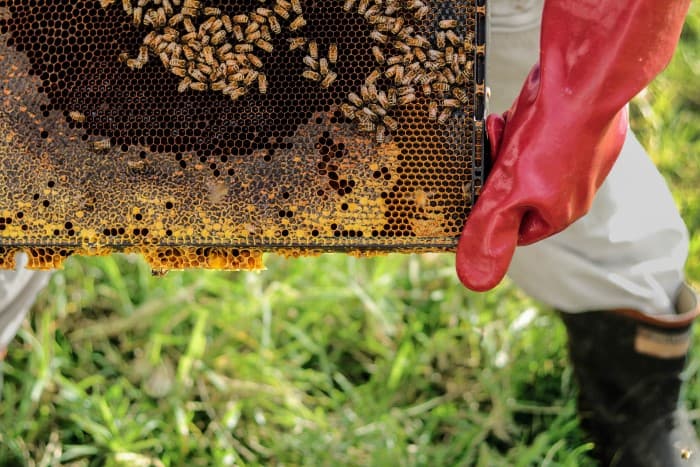 The weight of a beehive indicates how healthy a bee colony is, how productive the bees are, how much honey they make, and how many bees are populating it. Monitoring the weight of a hive allows beekeepers to understand the situation of a colony and determine the right solution for their needs.

How much does a beehive weigh? Full natural hives weigh 110 lbs for large, around 55 lbs for medium, and about 35 lbs for small. Full artificial hives such as flow hive and Langstroth hive weighs around 80 lbs and up to 350 lbs for horizontal Langstroth hives.

In here, I will be giving you a hint of how much a beehive weighs. But if you want to weigh hives on your own, I will be discussing the different ways on how you can do it more deeply in this article.

Bees can make their hives almost anywhere, you can sometimes see a hive attached to a hollow tree, underground, and in the open-air. But wherever these hives are, the weight of natural hives varies according to their size. Here is the average weight of large, medium, and small natural hives.

Large hives may contain about 60,000 bees. In a colony, a queen bee can lay an average of 1,500 eggs every day. After three weeks, the eggs become workers and after 24 days, drones emerge.

In a bee’s lifetime, a single bee can produce 1 tablespoon of honey, allowing 683 bees to make 9.5 ounces. So if there are 60,000 bees in a large hive, it should contain about 40 liters of honey in one season. In total, a large full hive may weigh about 110 pounds while the empty ones weigh around 17 pounds.

Medium sized natural hives may comprise around 20,000 to 30,000 bees. Most of these will include female workers, as well as the queen and a few male drones. Using the same calculation above, a medium hive can produce about 20 liters of honey. The bees, on the other hand, can weigh approximately 7.5 pounds.

Knowing these, we can assume that a medium sized full natural hive weighs around 55 pounds while empty medium sized hives weighs 9 pounds. The weight of the hive also varies according to the season, temperature, and the environment where it resides. During spring, a hive is at its heaviest. At the late summer until winter, the hive starts to decrease in weight.

A hive in transit or swarm may include as small as 3,000 bees along with a queen. We can take this as an example of a small-sized natural hive. A small hive can grow a colony with a population of up to 20,000 bees. In a season, a small-sized hive can produce around 13 liters of honey, allowing it to weigh nearly 35 pounds at full. An empty small-sized hive, on the other hand, can weigh around 5 pounds.

A typical empty flow hive that arrives with 6 Flow Frames weighs around 38.6 pounds. It can accommodate up to 60,000 bees and makes around 39 pounds of honey in a season. We can assume that in a good flow, a full flow hive weighs approximately 80 pounds.

A flow hive is a kind of artificial beehive that features patented technology, offering easier and a gentler way to harvest honey. As its name suggests, a flow hive allows the honey to flow out from the box with the help of its customize Flow Frames. With this, beekeepers can extract honey from the hive without disturbing the bees.

These hives are stacked common-sized boxes that include removable frames where bees build honeycombs. A full Langstroth hive can be as heavy as 100 pounds.

Weighing Your Own Hives

Weighing hives is a way for beekeepers to get a hint of how many bees are populating it as well as how the production of the colony is coming along. If you will take out every frame inside an artificial hive to examine, it will take you time and effort, and it will only stress you out. To weigh your hives, here are some of the best ways that most beekeepers apply.

The reason why hives are weighed through tilting is that they are typically heavy. Imagine weighing a full hive that can be as heavy as 300 lbs, it will be very difficult. Tilting your hive when measuring only one side at a time can save you from it. It is the reason why most beekeepers use this method when monitoring the production of honey inside their hives.

To do tilting, get a durable spring-type bathroom scale that can handle an enormous capacity. Measure your beehives by carefully tilting them to one side and then slide the scale below it. After taking note of the weight, repeat the process to measure the opposite side of the beehive.

To get the total weight of the hive, add the two measurements together. The sum you will get can be more or less the exact weight of the beehive. Although tilting can’t guarantee total accuracy, most beekeepers believe that the measurement it gets is close enough.

You can also get the same measurement by tilting from above using a sturdy luggage scale. To do this, you have to place screws on opposite sides of the top of the beehive. Tilt each side up by the scale then add the two weights together. But take note to secure all the boxes together with a strap to weigh them at once.

If you want a better accuracy when weighing your hives, you may also try the lifting method. If you can carry all the boxes up on a scale, this method may work best for you. The weight of the hive, on the other hand, depends on how many boxes, the volume of brood, comb, honey, propolis, as well as the number of bees is involved. If you think you can lift the whole thing, attach a durable strap to the hive then lift it onto a sturdy bathroom scale.

Another way you can use lifting is to open the hive and lift every box onto the weighing scale. It is way easier than lifting everything onto the scale but since you will have to open the hive, doing this will disturb the honeybees.

Of course, there are also high-tech solutions to weigh a beehive. Today, weighing hives can now become easier and smarter because of these devices. There is a beekeeping solution provider, offering a hive scale that utilizes NFC or Near Field Technology to show the data it collects from the hive to your phone. It can provide not only the weight of a hive but also some useful information that can help you to keep your bees well.

High tech hive scales can track the weight of a hive, which allows beekeepers to determine if it has a good flow of nectar or not. It will also send an alarm that indicates if the hives are robbed, topping, or attacked by bears. It may also indicate if a colony experiences an abnormal temperature and displays its humidity level.

Different species of bee has a different range of weight. For example, an average honey bee weighs 1/10 of 1 gram. This varies according to the bee’s size and maturity. Bees have 20,000 species that have different sizes ranging from 22 millimeters to 39 millimeters long. If you weigh 4,000 bees together, the total should be 1 pound.

Meanwhile, bumblebee workers can weigh around 0.04 to 0.60 grams. A huge queen bumblebee, on the other hand, can reach up to 0.85 grams because of its special diet. But if a hive has plenty of food, the worker bees can also reach almost the same weight as the queen. Also, female and queen bumblebees can weigh twice heavier when they carry pollen, nectar, or honey in their stomachs.

As a conclusion, knowing the weight of a beehive allow beekeepers to know how well the colony is doing. The heaviest beehive is the horizontal Langstroth hive. It contains more frames than the other artificial hives, allowing it to carry a larger colony. Natural hives, on the other hand, vary in weight according to their size. The weight of the naturally occurring beehives are just an estimate since it is impossible to get their accurate weight without disturbing the bees and destroying the hive. If you want to weigh your beehives at home, you can try the ways of weighing hives such as tilting, lifting, and the use of high-tech hive scales.