This is a question I get asked a lot by the hobbyist beekeeper and you should not be embarrassed to ask it, or worried you’ll get hybrid bee-wasps.

The short answer to bees and wasps mating is no. Disappointing, i know, but it is very important to understand why this is the case so I will attempt to clarify the situation in simple terms.

Differences between a bee and a wasp

Bees and wasps are both part of the Hymenoptera order of insects but there bodies are very different, even though the two share the same stereo-typically distinctive yellow and black markings in some of the most commonly associated types. Their behaviour is often quite different between the many types of bees and wasps, most notably in the aggression typical in wasps. 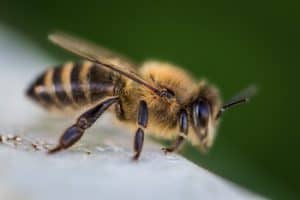 In the case of honey bees, they tend to be a lot larger than wasps. Honey bees are also hairy whereas wasps tend to be flat and shiny with a harder exoskeleton. The general habits of the two are also different, in general, where you can expect to see bee colonies of over 50,000 compared to wasp colonies of less than 10,000. It is also the bee workers that maintain the colony whereas wasp queens with build the nest for their colony.

The most commonly perceived similarity is that of the sting. A wasp will sting multiple times without issue but a bee will only sting once. After stinging, as with mating later in this article, the bees sting of ripped from its body and the bee flies away to die. 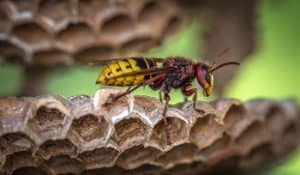 A wasp is an insect that is neither bee nor ant nor locust in spite of the visual similarities with the body and head shape. I can understand why I get asked about them being compatible with other. It would be interesting if they were like cats and dogs and we could produce designer bees; maybe i’ll leave that for another topic!

The most common wasp is a yellow jacket and are classed as eusocial. This simply means they are social animals that live if groups. The typical backyard bee is the honey or bumble bee. These too are eusocial and this is especially true for the honey bee, but, as with wasps, the majority of bee species are actually solitary in nature and are at most considered to be semi-social where it is only the labor that is divided within the group.

How do bees reproduce?

Let’s consider the honey bee for this as they are the most commonly kept bee for those keeping bees as a hobby.

A virgin queen is highly desirable and their may be many thousands of male honey bees waiting for her arrival. A few will get the chance to mate in mid flight but the mechanism for this is the same.

The above cycle may be repeated many times by many different bee drones. When a new suitor mounts the queen he removes to previous endophallus and inserts his own. unfortunately, for the bee drone, step 4 is also the resulting outcome. The bee drone will die shortly after mating but in rare occasions the male may survive the encounter. Sadly, he is then removed from the hive by the other bees having served his purpose.

Virgin queens will mate early in their lives and during the mating will retain approximately 100 million sperm within her oviducts. This provides the female queen with enough sperm to fertilize any future offspring. If she were to run out then new generations of queens will continue the colony. The honey bee queen is able to control and manage the sex of their offspring and can even determine, egg by egg, which are to be fertilized.

How do wasps reproduce?

I’ll deal here with social wasp reproduction because, as it is with honey bees, the males get a rough deal in this as well.
The majority of social wasps with mate once a year before the winter brings colder temperatures. The female will hibernate while the males die off and the cycle continues as below.

There will be some female wasps that are sterile and their job is to feed to young larvae and support the queen. This will continue through the spring time and then, during summer, the male wasps will emerge along with new fertile females.

Why can’t bees and wasps mate?

Now, you may be thinking I’ve just described two insects that can behave in a similar way, have similar attitudes towards social and solitary behavior and are even part of the same scientific classification for their order within the insect world. So, why can’t they mate? No viable offspring can come from these two species mating. They could, should they wish to try, but they are genetically to dissimilar for fertilization to occur.

2 thoughts on “Can Bees and Wasps Mate?”